Recently, the Boston Consulting Group (BCG) has published key findings of their latest “Most Innovative Companies 2014” survey. Beside the annual ranking, headed by the top three companies Apple, Google and Samsung, some insightful outcomes with regard to organizational and cultural requirements have striked my eye. According to BCG’s research, successfully innovating companies approach innovation as a system. The system is rooted in experimentation, and, like all adaptive systems, it evolves over time as the external environment and internal needs change.

After studying innovation among 759 companies based in 17 major markets, Gerard J. Tellis, Jaideep C. Prabhu and Rajesh K. Chandy found that corporate culture was a much more important driver of radical innovation than labor, capital, government or national culture. It has further been shown that adaptability seems to be the most critical pillar of successful organization cultures. Research from Charles O’Reilly et al. has found that adaptive corporate cultures are most effective in driving financial performance. But what does adaptability really mean? O’Reilly and his colleagues define culture as a social control system that drives certain kinds of behaviors. Adaptive cultures are those that encourage:

Yet, adaptive cultures are also notable for the behaviors they choose to minimize, O’Reilly notes. There’s less emphasis on being careful, predictable, avoiding conflict, and making your numbers.

An adaptive culture, emphasizing experimentation, promotes “organizational ambidexterity“. While startups and small ventures make big bets, i.e. placing all chips on one number, established companies have to avoid losing what they have already built up. However, they have the resources to conduct experiments in order to explore new fields of businesses, concurrently with exploiting their existing business. IBM with their Emerging Business Opportunity (EBO) intitiave can be seen as a prime exaple for this approach. In 2000, they decided to include exploration experiments in their portfolio. Like actual startups, some of these initiatives failed. But there were enough of them (seven in the beginning) that in the first five years alone, the EBOs added $15.2 billion to IBM’s top line, or more than twice as much as acquisitions did. Lesson learned: a balanced portfolio of exploration and exploitation activities is essential for companies in order to thrive on the short and long term. In a more up-to-date sense, this balance also comprises collaborating with external partners, e.g. teaming up  between multinational corporations and startups or small companies.

Those companies are aware that adaptability through adjustment to changing conditions requires an ability to both observe problems and then respond to them with multiple solutions. The point is not in knowing the single solution. It’s about having various of different options and solutions to turn to. There is a downside to businesses that focus heavily on standardization, optimization, and driving out variability: such organizations leave themselves vulnerable to underinvesting in experimentation and variation. Good experimentation helps firms better manage myriad sources of uncertainty when past experience can be limiting. And it is only through such experimentation, which might include structured cause-and-effect tests as well as trial-and-error experiments, that companies can unlock their true capacity for innovation. The right amount of experimentation depends not only on a company’s resources, but also on the pace of change in its industry. If the industry isn’t changing rapidly, doing a lot of experiments may be unproductive and expensive. But if no experiments are carried out at all, the company is likely to be in trouble if the industry is changing.

Given the proven relation between adpative culture and organizational survival and performance, why are so many companies struggling with establishing a culture of exploration, experimentation and variability? Two major stumbling blocks come to my mind.

If we stick to the definition above, a culture directs and rewards certain behaviors and traits being in compliance with organizational values. This leads to a collective mindset how things are being accomplished. Viktor Hwang has introduced the term “social contract” as set of values that governs people’s organizational life. He points out: Culture in business is primarily the conflict between two opposing social contracts.  One social contract is based on values of exploitation/efficiency/predictability (metaphor: plantation).  The other is based on values of exploration/variance/uncertainty (metaphor: rainforest). Both are valid  per se, but are completely opposite in effect. Hwang lists some opposing rules, highlighting this “clash of social contracts”:

Companies that live only on the left side won’t pay off in the end.  Companies that live only on the right side are doomed to die.  Startups and small companies often tend to stick to the left side. Large organizations – whether corporations or governments – can easily get stuck on the right side. Successful companies must exist in both worlds simultaneously. That’s hard to do – in particular for the people being supposed to succeed in both “worlds”. Most people seek consistency in order to align their behavior and decisions accordingly. Ususally, corporate cultures are dominated by the right side, thus leading people to incline to conform with the corresponding values. According to Bob Sutton and Huggy Rao, for scaling and established organizations in order to operate smoothly and to develop a collective mindset, it’s crucial that people don’t get conflicting messages.

To me, this seems to be a major root cause why putting an explorative culture on top of an (existing) exploitative one – resulting in an “integrative culture” – is extremely difficult. For example, introducing a “x percent rule”, permitting workers to dedicate a portion of time to exlorative projects beside their “core business”, may be sufficient to generate ideas and develop them up to a certain stage. But in most cases this setup does not lead to well-aligned and time-efficient incubation, let alone scaling, within the organization. Succeeding in these phases is strongly tied to full-time resources and a supportive environment. Sure, there are some companies, such as W.L. Gore, proving that this kind of organizational culture can be possible, but these are obviously rare exceptions. It’s a bit like mixing a symphony orchestra with a jazz band and expecting an outstanding concert to happen. 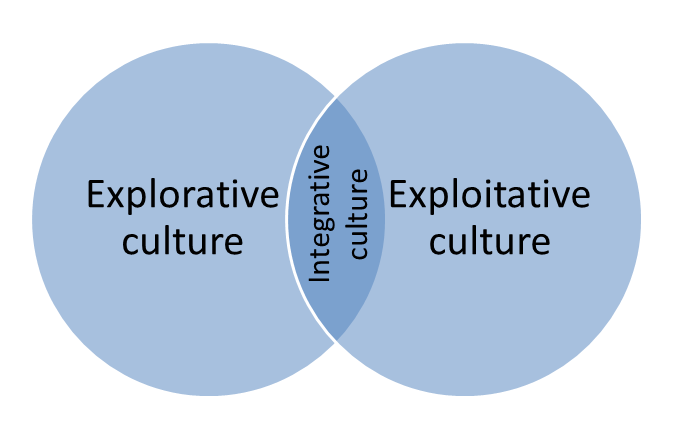 With that said, it may be indicated to shape distinct cultures with dedicated values, requirements and people. Each side must operate as if the future of the company depended on it alone! The cultures need to be separated, but with some overlapping “touchpoints” where capabilities, ideas and knowledge are exchanged in order to avoid isolation and to benefit from each other. Examples for touchpoints can be idea management platforms, portfolio management boards, corporate strategy teams or company-wide events and communication platforms. These touchpoints are to be staffed with well-suited people, being capable of integrating both world views and dynamically setting the right priorities. How exploration and exploitation can further be integrated through so-called “integration mechanisms” has been outlined earlier.

Case in point: many energy providers and electric utilities are currently undergoing this organizational and cultural tension. While they have been operating on the basis of an entrenched, monopolistic and highly predictable business model and “production-centered mindset” for decades, they are now being forced to transform towards customer-oriented energy service providers. This requires searching for novel, customer-centered business models and tapping emerging markets through experimentation, iteration and openness. This need for innovation is driven by values and capabilities being opposed to what made the companies successful. If not organized and lead properly, such transformation processes are therefore in danger to be accompanied by disorientation, demotivation and frictional losses.

Another road block directly goes back to human nature. Our species features a couple of traits, withholding most of us from embracing activities that we intellectually know would be conducive to innovation. Some of these traits are:

How can mandatory experimentation and variance be fostered in face of these common human traits? In fact, we face another paradox here: although an explorative culture is the means of choice to tackle uncertainty on a macro-level, it is often refused since it increases uncertainty on a micro-level. Reiterating the argument above: it seems reasonable to set up dedicated, protected spaces for experimentation, variance and diversity, resourced by people being equipped with the required personal traits. This highlights the importance of proper recruitment for innovation success and sustainable organizational performance.

The made suggestions are supported by BCG’s study outcomes. Breakthrough innovators (i.e. strong and disruptive innovators) – accounting for only 7.6% of BCG’s sample, by the way – seem to be especially effective at bringing together required management, governance and organizational design and synthesizing them for high impact.

Governance. Breakthrough innovators differentiate clearly among projects with low and high degrees of innovativeness and use different processes for radical and incremental R&D projects. Radical projects initially are permitted to have more openly defined project targets. Radical innovation processes allow for iterations and adjustments of initial plans to give individuals and teams ample room and time for experimentation. Breakthrough innovators protect radical innovation projects from strict cost-control regimes. More than 80 percent of breakthrough innovators allow projects to start with no projection of future returns.

Organization. Three-quarters of breakthrough companies use different processes and KPIs for radical innovation projects. They maintain open organization structures for radical-innovation entities that easily allow for collaboration with internal and external partners. They promote a culture of experimentation and testing that characterizes the radical innovation team. 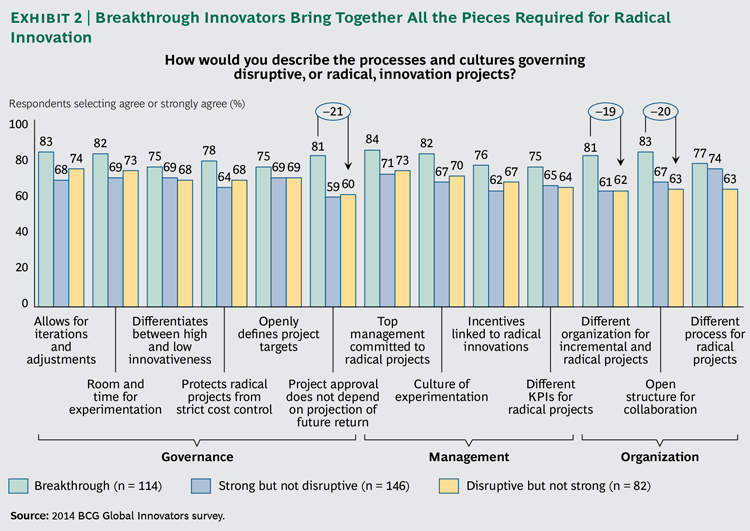 As can be seen from the figure above, it turns out that successful breakthrough innovators distinguish significantly in terms of the following  – primarily organizational and cultural – characteristics:

By definition, breakthrough innovation is the introduction of new ideas that drive a different way of doing things. This requires risk taking, of course, since no one can foresee the outcome or results of such initiatives. Breakthrough innovators are willing to make decisions and choices as much on the basis of intuition and insight as on data and forecasts – they bet on people rather than manage a process.

Some breakthrough innovators manage to use the entire company as a new-idea laboratory. Apple under the late Steve Jobs is perhaps the best-known example. Google’s policy of encouraging employees to spend 20 percent of their time working on their own ideas is another. The 3M Company sets the goal of earning 30 percent of its revenues from products introduced in the past five years, and the company aligns its culture and incentives accordingly. It has long allowed its employees to spend up to 15 percent of their time on projects of their choosing. But such companies are for more the exception than the rule.

Successful companies and their cultures are built on a common crucial pillar: adaptability. Adaptability is based on particular explorative values and behaviors, such as experimentation, iteration and variance. Moreover, it comes along with the need to deal with uncertainty and ambiguity. These requirements are basically incompatible with “daily business” and common human traits, where failure avoidance, short term orientation, habit formation and preference for predictability prevail. In order to build an organizational culture, being conducive to adaptability and innovation, the following advice can be given:

11 Responses to Innovation and Organizational Culture