The Firm of the Future Will Manage Two Types of Businesses

Bain and Company has just published a worthwile article, debating on the question: What will the firm of the future look like?

Among several characteristics, the authors also particularly anticipate future-proof companies to be required to manage two types of businesses by deploying distinct “engines”:

Companies have always pursued innovation in their core business. Clayton Christensen has called these “sustaining innovations”; they bring incremental improvements in performance or value. But what about the innovations that upend an entire industry? They are all around, even if leaders sometimes find it hard to believe it will happen to them. To thrive in this environment, firms will need to dial up their ability to see around corners, spotting trends before they are well formed and mobilizing resources quickly to adjust to changing circumstances. Seeing around corners is both art and science, and while outright prediction is usually a fool’s errand, there are ways to improve your odds of success. It pays to maintain a high external orientation, staying close to customer needs as well as to moves by current and potential competitors, and to learn from ecosystem partners. It’s also important to tap into the collective knowledge of your internal resources, particularly the front line, on a much broader scale than most businesses habitually do.

Whether the threat is visible and imminent or invisible and theoretical, leaders of the firm of the future will be toggling between running their core—today’s engine—as efficiently as possible, looking for sustaining innovations there. They will also need to create a new business—tomorrow’s engine—that reflects new customer needs, new competitors, new economics or all three.

This “Engine 1, Engine 2” approach is what allowed Marvel to continue to develop its publishing core while simultaneously expanding the character licensing business that has become its new core. Likewise for Netflix: From the mid-2000s, the core DVD business was progressively milked to fund the rapid growth of the streaming business. IBM has shrunk its traditional hardware business while dramatically expanding its newer software and services offerings (see Figure 5). In each case, moves into Engine 2 meant new competition, new cost structures and new economic models to run in parallel, and the new business took at least five years to flourish. 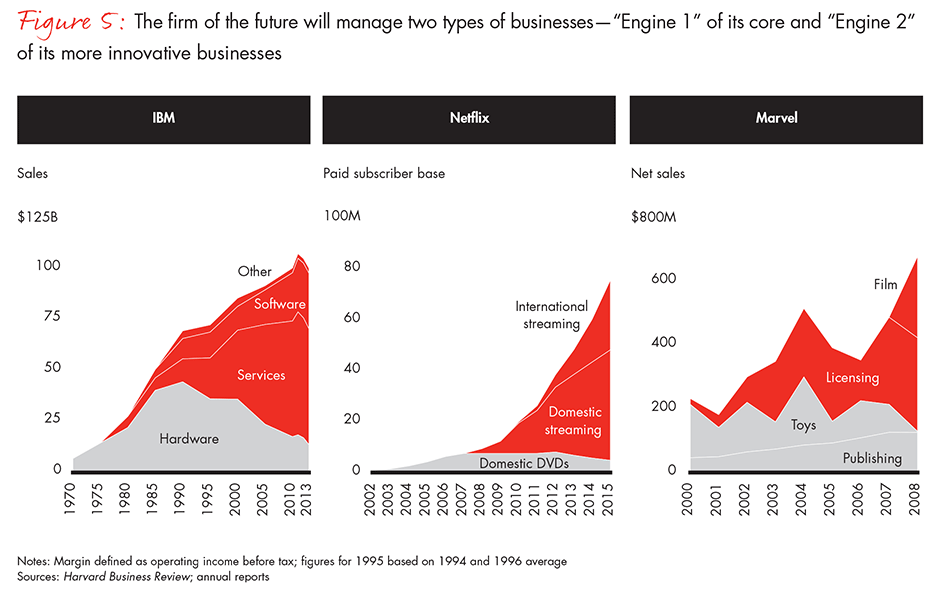 Defining and building an Engine 2 requires creativity on several fronts. It is not enough to define a compelling vision or point of arrival; that is often the easy part. The task also requires identifying a first step that is focused and that allows rapid testing of the core idea, as well as thinking through subsequent moves that could be opened up by initial success. In many ways, this was Steve Jobs’ genius at Apple. Everyone had the same idea for the first-generation move. But he was two generations ahead, and so understood the value of the ecosystem that could be created by keeping hardware and software vertically integrated.

The two engines demand different approaches. Discipline, repeatability, small continuous improvements, careful risk assessment and conventional financial analysis are the hallmarks of Engine 1. Agility, creativity and leaps into the financial unknown with the expectation that only a few investments will ultimately pay off are the chief traits of Engine 2. Running both in parallel raises some tricky operating model questions such as these: To what extent should Engine 2 redefine Engine 1? How and when should innovations get folded back into the core (and who decides)? And how do you manage the allocation of talent and other resources across the company? Perhaps most fundamentally, is it better to build Engine 2 yourself, or is it better to monitor capabilities being developed externally and then acquire them? For the most successful firms in the coming era, we believe managing both engines will be required. These firms will use their Engine 2s not just as sources of new growth but as vehicles to transform their companies into firms of the future.

What this could look like in 2027: Companies will set up and manage Engine 2 under the corporate umbrella but will likely structure, staff and fund it separately. Resource allocation will be a point of integration across Engine 1 and Engine 2, and will be continuous and zero-based. Top talent will rotate through both engines, learning a balanced set of skills and fulfilling mission-critical roles on both sides of the business.

This outlook pretty much captures key points I’ve been putting forth all along up to now. And it’s yet another confirmation for the importance of designing and implementing modern dual corporate innovation systems.

Beside Digital, companies are irrevocably forced to build Dual into their operating systems and organizational designs. Those who miss out on setting the course eventually risk being “future-unproof”. Better start taking action now!

The Trinity of Dual Innovation and Transformation
SCALING UP in Corporate Settings: First Achievements and Outlook