The Future of Innovation is Open

Sustainable innovation requires evolution and revolution. Over the long term, organizations need to be capable of both moving along existing growth trajectories and creating new ones when the old business matures or stalls. This can be depicted as recurring movement along innovation s-curves.

In the case of a new venture, acquiring lean start up skills can significantly increase the likelihood of successfully passing through the s-curve for the first time. Yet, research shows, only a minority of startup ventures are able to manage this challenging journey. Unlike Google, most of them struggle or are incorporated by bigger companies before they scale up.  As Tim Kastelle points out, s-curves basically consist of the following stages (see figure below).

Invention (Y): The time from when you first have an idea to the time when the idea is genuinely ready to spread. This can be, for instance, the application of a new technology or the development of a novel product.

Diffusion: According to Steve Blank, this stage can be divided into two sub-stages, referred to as Search and Execution. 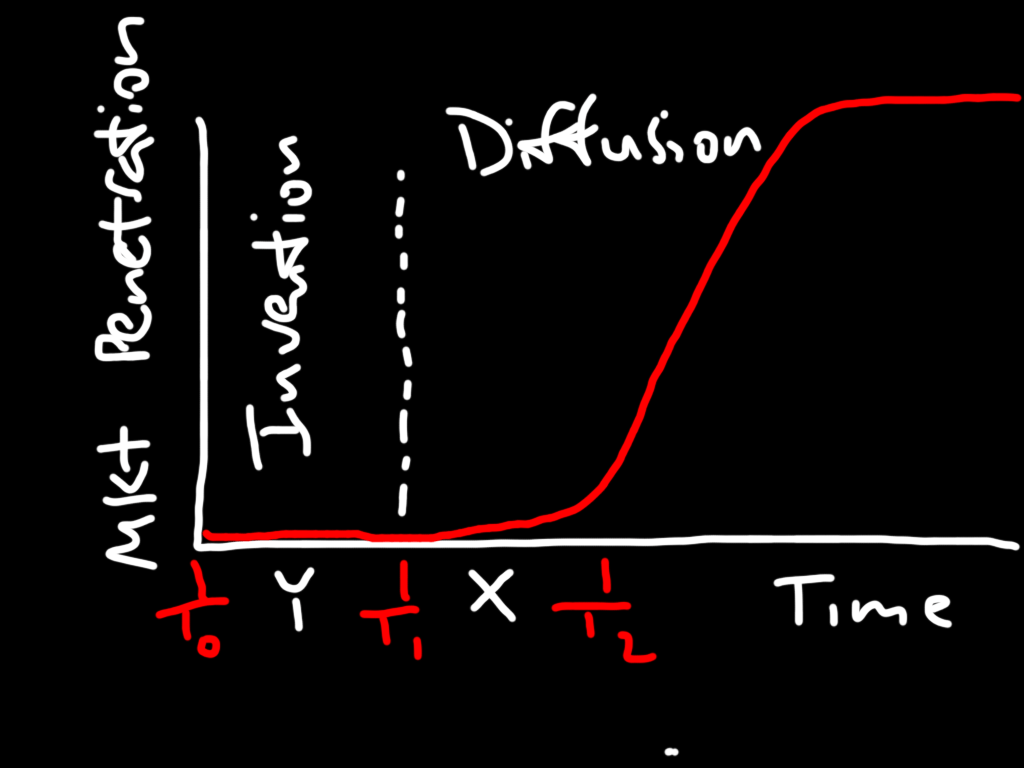 S-curves basically reflect value chains: innovation success is eventually determined by being able to scale novel ideas. Being first-to-scale, in turn, is based on inventing and properly validating the idea. One main characteristic of a chain is: it’s just as good as its weakest part.

An important point here is that every stage requires dedicated capabilities and culture in order to be completed successfully and efficiently. Invention is mainly based on technical and research expertise, whereas the business model search process depends on hypotheses testing, experimentation and customer-related skills. Finally, successful execution relies on commercialization competency and operational capabilities.

With regard to innovation culture, Costas Markides and Paul Geroski distinguish between ‘Colonizers’ and ‘Consolidators’. They describe the differences between these different players as follows:

The fact that firms that create new product and service markets are rarely the ones that scale them into mass markets carries serious implications for the modern corporation. Our research points to a simple reason for this phenomenon: The skills, mindsets, and competencies needed for discovery and invention not only are different from those needed for commercialization; they conflict with the needed characteristics. This means that firms good at invention are unlikely to be good at commercialization, and vice versa.

Some firms are natural colonizers, able to explore new technologies quickly and effectively and to make the creative leap from a technological novelty to a product or service that meets customer needs. What these firms are good at is creating new market niches. Other firms are natural consolidators. They are able to organize a market, turning a clever idea into something that reliably and regularly meets the promise, can attract consumers, and can be manufactured and distributed efficiently to a mass market.

Very few firms are good at both sets of activities.

As a result, the authors make a radical claim: To succeed in scaling up new radical markets, don’t even try to create them. They suggest for established businesses to leave the challenge of market creation to startup firms and to focus their own attention and resources on consolidation:

We believe that big established firms do not have to be actively involved in both the colonization and the consolidation of new radical markets. Given their skills and attitudes, incumbents will be better off if they stick to consolidation, positioning themselves to exploit the pioneering efforts of others. One primary way established firms can accomplish this is by developing a network of feeder firms and serving as a venture capitalist to them.

Indeed, in face  of increasing pace of change, resulting in decreasing life cycles and shortened s-curves, this might be an important point to consider. Effective and efficient coverage of each innovation stage may require a craft vs. scale specialization and ‘job-sharing’ among different players, rather than targeting at doing all activities under one roof.  This suggests the formation of value networks with complementary roles along the innovation chain according to the following chart:

Major preconditions for the formation of these value networks are openness and the willingness to collaborate, rather than to compete to each other. Large firms take a key role as ‘interface’ to the market. They are required to tie open and customer-oriented business models by integrating and orchestrating their partner networks. “The most exciting new business models are networks connecting capabilities across boundaries“, says Saul Kaplan. Why? Simply: customer value doesn’t care about silos and boundaries. Organizational capabilities to reinvent and create new business models become more and more important. There are two reasons for this: Firstly, innovation activities tend to shift from product and process innovation towards business model innovation. Secondly, business model innovators outperform traditional innovators (e.g. product innovation within an existing business model) over time. 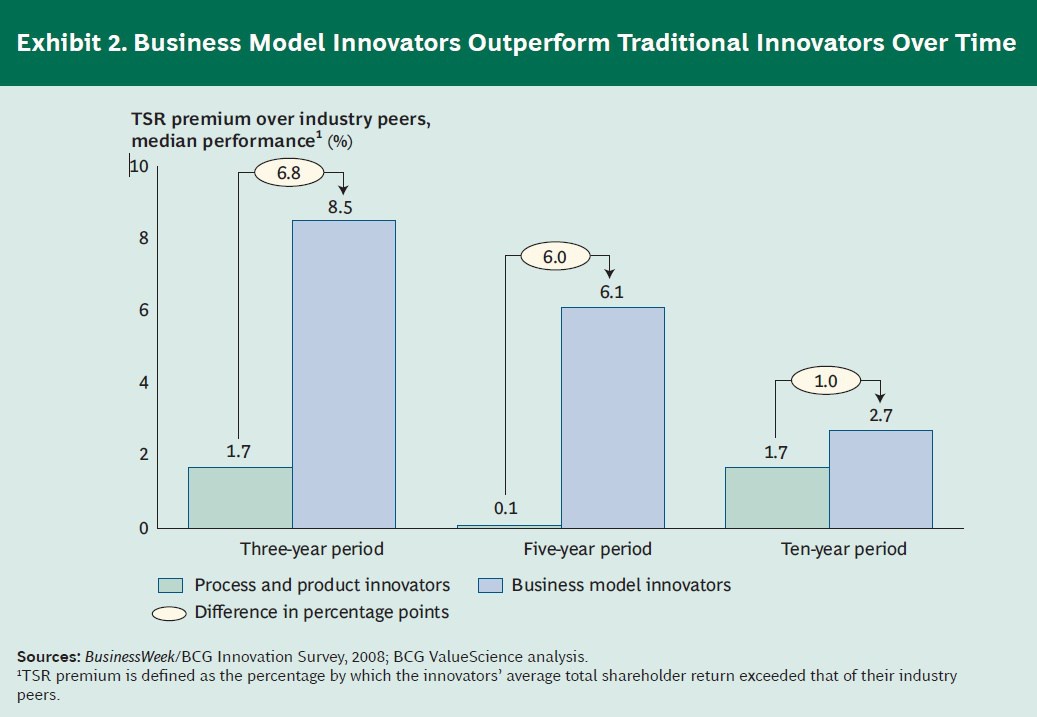 Recently, Scott Anthony has announced a new era of innovation, identifying big companies as drivers of innovation and transformation. One of his main points is that the trend towards business model innovation taps incumbents’ unique strengths. This goes well together with an argument made by Irving Wladawsky-Berger:

But, the kind of innovation that Michael Mandel writes about in his article is a mixture of disruptive and incremental. It favors large companies because of their ability to address complex systemic problems, manage the large-scale ecosystems that solving such problems requires, and bring their solutions to market all round the world. The problems are typically not based on new inventions, so it is hard think of them as representing disruptive innovations, but their scale and scope puts them in a class way beyond incremental. This kind of complex systemic innovation leverages lots of known ideas and makes them work together to help address important problems. (…)

Large companies that make the successful transition to an open, collaborative style of innovation will emerge as effective ecosystem leaders. Such companies will find that their scale is a major asset for the kind of complex systemic innovation that will be increasingly important in the decades ahead.

Taken together, all this seems to indicate that the future will be about open and collaborative innovation, benefiting from ecosystems with dedicated roles for all stakeholders. On the people level, corporate catalysts are then going to play an ever important role to drive innovation. Those integrators combine entrepreneurial spirit with an ability to leverage corporate resources and to orchestrate the diverse network.

Sustainable innovation requires recurring innovation diffusion along s-curves. The different stages of the cycle demand distinct capabilities, cultures and mindsets. This suggests the formation of open ecosystems with dedicated roles for research organizations, startups and larger firms – in accordance with their natural strengths. Due to an ongoing shift towards business model and large-scale innovation, established firms will likely take a leading role in the future. On the people level, innovation is then primarily going to be driven by integrative thinkers with an ability to orchestrate the value network, referred to as corporate catalysts.

4 Responses to The Future of Innovation is Open