Triggered by a couple of recent discussions, I’ve been pondering for a while now over the question how evolution relates to revolution when it comes to innovation. In the following, I’ll try to develop my view on this. Let’s define  evolution as continuous and incremental innovations of a firm’s existing business. Whereas revolution can be described as radical and discontinuous leaps to completely novel offerings, opening up new business and growth trajectories. Jeff Stibel writes:

Evolutionary innovators ask questions based on the limitations of existing solutions; revolutionary innovators ask questions no one else has thought of. This sentiment was eloquently captured by Robert Kennedy when he paraphrased a quote by George Bernard Shaw: “Some people see things as they are and say why? I dream things that never were and say why not.

Basically, firms need both, revolutions and evolutions in order to operate sustainable and profitable on the long term. At some point in time it becomes mandatory for every organization to operate “ambidextrously“. Those organizations are at risk of failing because innovations might be driven in the wrong system. Consequence: the existing business dies, the novel idea dies, or both. Organizational and individual capabilities to integrate opposing innovation systems prove to be increasingly crucial. Grant McCracken proposes, every company should build a second corporation:

The first corporation exists to win. It exists to find, extract, and capture available value. Leave this just as it is. But let’s acknowledge that this first corporation exposes us to risk. After all, it is designed to work with the world as it is. So it must be out of alignment with the worlds that may be. It make us a prisoner of the moment. The second corporation is looking for those worlds that may be. It’s task is not to win, but survive. 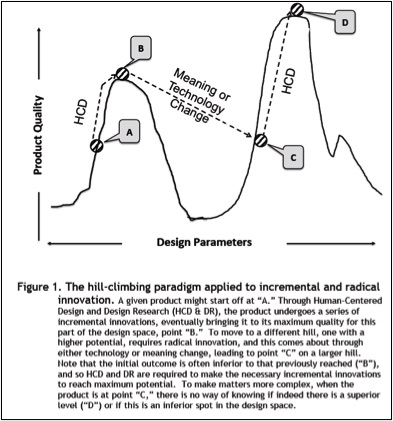 According to Don Norman and Roberto Verganti, the complementary relation of incremental innovation (within a given frame of solutions) and radical innovation (change of frame) can be depicted as hill-climbing paradigm (see figure). They write:

“Revolutionary ideas rely on evolution to survive”, says Rieva Lesonsky in a great post on that issue. This important interplay also becomes obvious upon considering the innovation adoption cycle, as discussed by Greg Satell. He writes:

When an early innovation comes to market, there will undoubtedly be a small amount of people who are excited about it. After all, it can do things nothing else has been able to do before. That’s cool and the “cool crowd” gets it immediately. They are enchanted by their new toy and start advocating it to friends. Adoption increases. There is, however, a problem. The new product doesn’t work very well, it’s hard to use and it’s expensive as many disruptive innovations tend to be. Many people can’t see the point in shelling out big money to buy a product that confuses them, makes them feel stupid and the final product experience doesn’t seem worth the effort. That’s when a change in the basis of competition happens. Success begins to become less a matter of features and functions and depends more on the interaction with the user. In other words, less on engineering (in the classical sense of the word) and more on design. 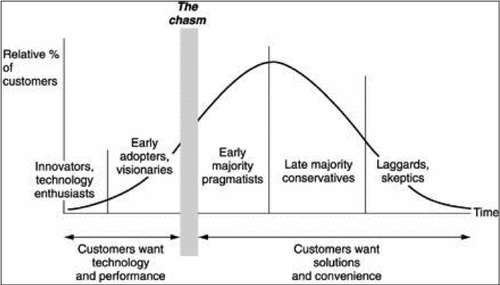 The point is: at the outset, radical innovation attracts early adopters due to its novelty. In order to cross the chasm and capture the mass market, the innovation needs to get optimized in terms of customer needs and user experience. That’s accomplished through steady incremental steps, typically leveraging insights gained by employing customer-centered methodologies. Drawing on the model of Norman and Verganti above, launching a revolution is like leaping to a new hill. Eventually succeeding in the marketplace, however, requires climbing up the hill to the peak through evolutionary progress.  “Breakthroughs don’t pay“, summarizes James Gardner the fact that research suggests: a first-mover advantage doesn’t seem to exist. Therefore, innovators don’t necessarily need to be first-to-market, but first-to-scale.

Another take comes from Jeff Stibel:

While both types of innovation play a vital role in the developmental ecosystem of technology, industry and business, it is the non-linear or revolutionary innovations that make the most significant advances. These are the ones that make the real difference. The really huge achievements in technology and the world at large are the result of visionary activists who imagine and then build something none of us had previously thought possible. (…) Reasonable people can debate whether a particular innovation belongs in the first category or the second. What is not debatable is that while both play a role in the ecology of innovation, it is the truly revolutionary innovations that make all subsequent incremental improvements possible.

Sustainable innovation isn’t about either evolution or revolution – it’s about both/and. Organizations are required to develop a “complementary innovation system” by integrating opposing approaches, capabilities and mindsets.

• Evolution needs revolution in order to explore further potential to be tapped.

• Revolution needs evolution in order to survive and thrive.